Asana is Sanskrit for “seat”. It is no accident that this word be chosen to describe the “posture” of Yoga. The idea of the “seat” in this context refers not only to the physical position of the body, but to the position of the spirit in relation to Divinity. This idea is often referred to as the “One Seat”, by Yogis and Buddhists alike.

Modern usage of the word asana in reference to the practice of Yoga generally intends the lesser definition; a physical posture or pose. Patanjali, in the Yoga Sutra describes asana as sitting meditation, where meditation is the path to a realisation of the Self. Looking at these two ideas in contrast, we see the idea of asana as both simple posture and a path to the unity of spirit.

Although, as noted, that the original idea of asana referred to sitting meditation, that idea has evolved over the centuries to produce the variety of body positions that we are familiar with today. These postures have their roots in devotion and/or health, but ultimately all are intended to lead back to the possiblity of sitting more comfortably in meditation.

The practice of asana promotes muscle flexibility, and bone and hard tissue strength, as well as massaging the organs, and bringing into balance various internal and glandular functions. A more esoteric intention is facilitating the flow of prana (vital energy; qi in Chinese; ki in Japanese) to aid in balancing the koshas, or sheaths of the physical and metaphysical body.

The physical aspect of yoga asana has been much popularised in the West, and is touted by a great many people, and devoted celebrity-practitioners like Madonna and Sting have contribited to the increase visibility of the practice. This has given rise to a misconception that asana practice is the sole aspect of yoga. Yoga asana are actually part of Hatha Yoga, which is just one of several different Yogic paths.

In the Yoga Sutra, Patanjali writes of asana as the third of the 8 limbs in Classical or Raja Yoga. Those eight limbs are the yamas (obligations) and niyamas (devotions), asana (postures), pranayama (breath work), pratyahara, (sense withdrawal or non-attachment), dharana (concentration), dhyana (meditation), and samadhi, (a realisation of the True Self and unity with God).

“There are an infinite number of yoga asana.” (Sri Dharma Mittra).

In 1975, as an offering of devotion to his guru, Swami Kailashananda Maharaj, Sri Dharma Mittra set out to catalogue the vast number of yoga asana. Through ancient texts, books, students, teachers, and his own vast knowldege, he compiled 1300 variations. These were originally published as the classic Master Yoga Chart, and 608 of these postures were recently made available in a small compendium entitled, “Asanas: 608 Yoga Poses” by Dharma Mittra (New World Library; 2003 ISBN 1577314026). Although there is no way to establish an exact set of postures, this work is considered the definitive collection by students and yogis, alike.

Along with the above mentioned resource, there is a wealth of knowledge on this subject available in books, and on the internet. It is best, however, to begin under the direction of an experienced, and hopefully certified, yoga instructor. This person can observe the execution of postures, as well as providing more in-depth instruction to aid in both your basic practice, and your development as a student.

In the Yoga Sutra, Patanjali suggests that the only requirements for asana is that it be “steady and comfortable”. The body should be held firm, relaxed, and the practitioner should not experience discomfort of any kind. Tightness or tension observed within the body should be consciously relaxed. Breathing should be natural, through the nose and into the belly. This abdominal breathing pranayama is called ujjayi (pr., oo-JI-ya), or the “ocean breath”. Ujjayi means “lifted up”.

According to Yoga practitioners, when bodily control is mastered, they are free from what they call the ‘pairs of opposites,’ such as heat and cold, hunger and thirst, joy and grief, and so on. This non-dualistic perspective comes from the Sankya school of the Himalayan Masters.

Listed below are traditional directions for performing asana:

This article is licensed under the GNU Free Documentation License. It uses material from the Wikipedia article “Yoga Asanas – Yoga Postures”. 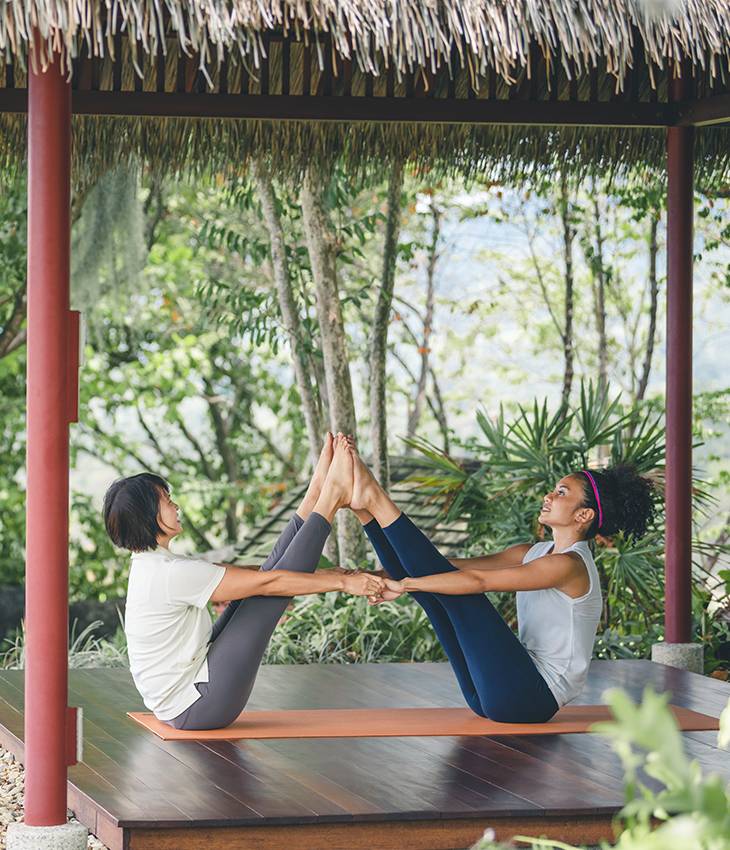 Our spa retreat is the perfect place to escape from the pressures of feeling overwhelmed, but for those times that you need to quickly regain control of a situation, these are 7-steps to follow, shared by the wellbeing specialists at Kamalaya Koh Samui Wellness Sanctuary & Holistic Spa.

The Best of Kamalaya

As we round up another year of wellbeing, the key experts at Kamalaya Koh Samui Wellness Sanctuary & Holistic Spa share their top tips in preparation for a new year of whole being wellness.

Try these simple suggestions to cultivate your meditation practice at home.

Kamalaya’s wellness team put their best foot forward and came up with a Wellness Advent Calendar to keep you inspired and motivated.

Our eating habits and preferences have a major impact on our physical health and appearance.

In this post, we’ll look at four different types of physical yogas and their benefits from Kamalaya Wellness Sanctuary & Holistic Spa to help you identify which one would work best for you.

Yoga through meditation works remarkably to achieve harmony and helps the mind work in sync with the body.